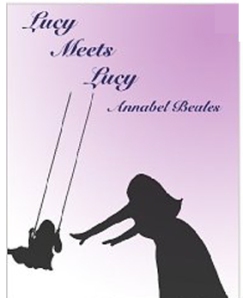 The Blurb
When she kicks out her fiancé Alec after discovering his affair, Lucy finds herself having to deal with a new life of being independent. Discovering a new challenge is one thing, but then having more along the way is another; first she loses her job and then the roof over her head. In the meantime Dom turns up and whisks her off her feet making her reality a thing of the past.

Falling head over heals with him she begins to look forward to spending the rest of her life with him, but when history rears it’s ugly head throws them both into a whirlwind that they might not get out as Dom’s ex appears back on the scene.

Will Lucy be able to cope with the pressure of being the famous Dominic Langley’s fiancée? Or will she fade into the background and go back to her quiet life in Hampshire? Or can she hide behind the controversial story that has appeared from the past?

The Review
I was contacted by the lovely author Annabel Beales to review her novel Lucy meets Lucy.

Lucy meets Lucy follows the life of a normal girl called Lucy who is struggling with life after she loses her job and home all in one day. In comes her knight in shining armour in the shape of a musician called Dominic, Dom for short. He whisks her away from sadness and creates a world she would normally only dream of. However, one horrible day causes Lucy anguish as she founds out that Dom has a child from a previous relationship and it’s made even worse when the pair find out the child is called Lucy too.

Will all go well for the pair with the recent addition or will their fairy tale come crashing down?

I have decided to give Lucy meets Lucy 3 out of 5 stars. I thought the story was good and I liked how different situations changed Dom and Lucy’s relationship because quite frankly not all of life is plain sailing.

Lucy’s Mum Esther was adorable and I wanted to take her home and make her cook for me. My Mum is lovely too I should add, but it was evident that Esther loved her daughter and it was so endearing.

I didn’t expect Dom to have a child from a previous relationship and more so to be called Lucy too. I don’t know how I’d react if that happened to me. However, I was a little annoyed at how they dealt with the situation because they seemed to see the child as a terrible thing, which she wasn’t. I’ve had experience with my Dad being difficult and him blaming me when he was the one who did the deed and left, so I thought that was wrong.

I was a little bit distracted with editing issues that appeared in the book.  I’m sure once these have been sorted out it’ll be ok.

All in all, Lucy meets Lucy was a good read and everyone should go visit Annabel’s blog.

You can purchase Lucy meets Lucy on Amazon.