I really struggled with this! I spent days pondering over books and heroine type characters I’d like to be like. I thought of the obvious ones like Hermione but realised everyone would pick her if they could. Then it occurred to me, why has it got to be a female character? So I finally made my decision and settled on Richard from The Beach.

For those who are unfamiliar with the book, here’s the official blurb: The Khao San Road, Bangkok – first stop on the backpacker trail. On Richard’s first night there a fellow traveller slits his wrists, leaving Richard a map to ‘the Beach’. The Beach is a legend among young travellers is Asia: white sands circling a lagoon hidden from the sea, coral gardens and freshwater falls surrounded by jungle. In this earthly paradise, it is rumoured, a select community lives in blissful innocence. For Richard, haunted by the glamour of Vietnam war movies, a trek into unknown Thai territory is irresistible. He was looking for adventure. Now he’s found it.

There’s nothing particularly special about Richard. He’s not a wizard or a vampire. He hasn’t got super powers and can’t do magic but he does something that I’ve dreamt of doing my whole life: packing his bag and travelling somewhere far away and into the unknown. I think inside everyone there’s a traveller or adventurer who is longing to leave to normalities of everyday life and search for something more and Richard does just that and he finds paradise, in the form of The Beach. I know it’s only fiction, but I admire what he does and if I had the money, courage and confidence I’d do exactly the same thing.

Not only that, The Beach is one of my all time favourite books and was also made into a film starring Leonardo Dicaprio and if I was Richard I’d look like this: (see below) Can’t complain. 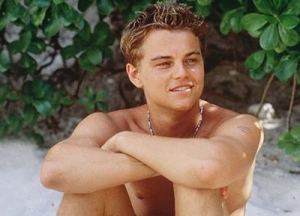 “I still believe in paradise. But now at least I know it’s not some place you can look for. Because it’s not where you go. It’s how you feel for a moment in your life when you’re a part of something. And if you find that moment… It lasts forever.“

Love, Jenny xYou can find out more about Jenny at jennyinneverland.wordpress.com and follow her on Twitter at @jennymarston_xo