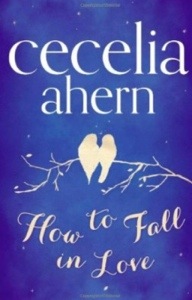 The Blurb
She has just two weeks. Two weeks to teach him how to fall in love – with his own life.

Adam Basil and Christine Rose are thrown together late one night, when Christine is crossing the Halfpenny Bridge in Dublin. Adam is there, poised, threatening to jump. Adam is desperate – but Christine makes a crazy deal with him. His 35th birthday is looming and she bets him she can show him that life is worth living before then.

Despite her determination, Christine knows what a dangerous promise she’s made. Against the ticking of the clock, the two of them embark on wild escapades, grand romantic gestures and some unlikely late-night outings. Slowly, Christine thinks Adam is starting to fall back in love with his life.

But has she done enough to change his mind for good? And is that all that’s starting to happen?

The Review
I received this book as a Christmas present and when I ripped open the wrapping paper, you know I was smiling in delight. I’m slightly biased when it comes to Cecelia Ahern novels because I’m not shy in the fact that I love her work, a lot!

How to Fall in Love was absolutely brilliant (a little teary) but brilliant all the same.

Christine seems to be in the wrong place at the wrong time. They say lighting never strikes twice, but in her life, I’m afraid it does. Twice she has had to deal with two suicidal incidents and both times she’s tried her best. The second time sees her trying to help Adam, a man who is depressed and seems to want to give up on the world. Out of the blue Christine makes a deal, if she can make Adam’s life happier in the two weeks before his birthday, he must promise he will stay alive.

Oh Jesus, what can I say? For someone that is overly emotional anyway this novel seemed to make me cry and get teary pretty much on several occasions. It wasn’t because the story was depressing it was because it was full of heartfelt and thoughtful situations.

The main topic of ‘How to Fall in Love’ is suicide. The topic itself can lead to quite a lot of heated debates, but I think Cecelia Ahern dealt with it perfectly. From a personal point of view I felt that it highlighted the issue and made readers realise that having thoughts like this doesn’t make you ‘weird’ ‘mental’ or other such words, but that it happens and also, most importantly, that there are people out there who can help, even if you think there isn’t.

I can see myself in Christine because I always like to help people and even if that means not helping myself. She definitely needs a helping hand and a big hand at that. She’s the type of person you’d love to have as a friend.

I am always the first one to complain when two characters get together and although, you know Christine and Adam would eventually end up as a couple, you were happy. It wasn’t until the last few chapters it all came out that they liked each other as they were too busy trying to deal with their mental health.

You can purchase ‘How to a Fall in Love’ on Amazon or Hardback.

You can find more about Cecelia www.cecelia-ahern.com and on Twitter at @cecelia_ahern.