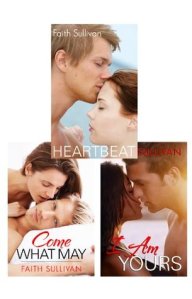 Heartbeat
Katie and Adam are afraid of love.  She carries the scars of a first kiss gone terribly wrong.  He uproots his life to flee the stinging betrayal of an ex. When trust is no longer an option, all romance is suspect.

As a young paramedic, Adam rescues people for a living but cannot save himself. Katie, just out of high school, struggles with a tortured home life she cannot escape.

Everything changes when Katie hops into the front seat of Adam’s ambulance. Overwhelmed by what they are feeling, neither possess the confidence to make the first move. They walk away from each other, full of regret.

To find her, Adam risks his future. To be with him, Katie sacrifices her security. Little do they know, what little time they do have, is being measured by a heartbeat that is slowly dying out.

Come What May
Adam is through with love. He unravels blaming himself for what happened with Katie. His final moments with her echo through his nightmares. She owns him body and soul.

To dull the pain, Adam invites a string of women into his bed. Fueled by alcohol and desperation, his meaningless hook-ups provide little comfort. When he closes his eyes, it’s Katie he sees.

The only one who helps to ease his guilt somewhat is Jada. But as his new ambulance partner, Adam considers her off limits. He doesn’t want to get seriously involved with anyone, much less her. Yet he can’t stop fantasizing about the feel of her caramel skin against his.

Despite his intentions, Adam’s bond with Jada deepens as they respond to a series of emotional calls. Their mutual attraction becomes undeniable. But how can he give his heart to Jada when it still belongs to Katie?

I am Yours
Adam is at a crossroads. He has Katie on his mind and Jada in his bed. Now with the ultimate choice before him, he must decide between fantasy and reality.

Katie’s his dream girl, but Jada’s his best friend, his partner. As a paramedic, he’s supposed to save lives, not wreck them. Yet his failure to commit leaves a trail of heartache in his wake.

Things come to a head at his brother’s wedding when a surprise announcement leaves Adam scrambling to pick up the pieces. Sure, women find his shaggy blond hair and aquamarine eyes irresistible. But to him, sex is nothing more than a means of escape … until it turns into a psychological trap.

His mind is telling him one thing, while his heart is beating another. He’s not sure what he wants when it comes to a serious relationship. Sorting out his feelings, he finally comes to a startling realization. He is capable of love. But what if it’s too late?

The Review
I was lucky enough to win Emily’s giveaway recently and in the package I received the Heartbeat Trilogy by Faith Sullivan.

I decided to write a review of the 3 books collectively so I could talk about the story without having to worry that I was getting the wrong novel.

The Heartbeat trilogy follows the life of Paramedic Adam who is struggling with a few personal issues.  One day whilst working he has to deal with a very difficult case and sadly, in result sees a young girl die in his arms. From that afternoon his life flips upside down and he sinks to the bottom of a beer bottle more often than not.  In steps a new Ambulance partner Jada, she tries her best to help Adam, but does she succeed?

As you all well know I am not a fan of novels that have two main characters that automatically fall in love. At first I thought this would happen with Heartbeat, but alas I was completely wrong. The story has many a flip and turn and I did not expect the ending to be how it was.  You sit there after reading and think ‘Wow that was fantastic!’ (I even say that about all 3 books within the trilogy).

I felt for Adam in all three novels because inside he was a broken man and he really needed someone’s help. I can’t imagine dealing with death when being a paramedic, but I guess that’s all part of the job. Nightmares for him stem from a patient’s death and he just simply cannot get over it. I guess it is one of those situations where you won’t know how you’ll feel or react until it happens.  Death cannot be a nice feeling for anyone and my heart did break for him.

When Jada steps in I was hoping she’d help Adam and she thankfully did (well, to a degree anyway). She has her own issues to deal with so I think to take on Adam’s as well was a really nice thing to do.  Adam and Jada’s relationship, professional or “otherwise”, was brilliant for the Heartbeat Trilogy and the pair connected with one another on so many levels.

An aspect of the three novels that I liked was how the writer added different cases for Adam and Jada to deal with as paramedics. As much as they had personal issues going on in their heads, life goes on. I mean if we have an issue, we still have to go to work, don’t we? It added a sense of reality to the story and it helped you gain perspective.

All in all, I think the Heartbeat Trilogy was a pleasant surprise and I would highly recommend you all giving it a go. It should also make you think that just because you’ve heard little about a book doesn’t mean it’ll be less than impressive.

You can purchase The Heartbeat series on Amazon – Heartbeat | Come What May | I Am Yours – all are also available on Paperback!

Find out more about Faith at faithsullivanwrites.blogspot.co.uk or on Twitter at @_faithsullivan_

One thought on “The Heartbeat Boxed Set – Faith Sullivan”