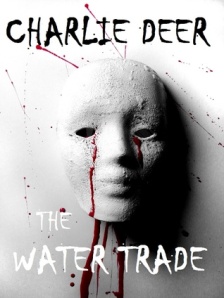 I haven’t had a Question and Answer session on the blog for a while so I’m excited to announce that today I’m joined by Charlie Deer author of The Water Trade. It’s a novel full of grit and sex, but hey, that’s never a bad thing!

Take a look below at the questions and fab’ answers from Charlie.

Your latest novel ‘The Water Trade’ is about the sex industry and the nightmares associated with it, what gave you the idea for the story?
Having lived in Hong Kong and spent many, many years as a young woman adapting to a new culture and its energetic night life and multi-layered cosmopolitan lifestyle; I soon came to know of Hong Kong’s seedy side to the city much like London’s Soho.  You soon begin to hear rumors and stories; having close friends who where police officers in the Regional Anti-triad Units and the District Anti-triad sections, I got to hear more than the average person about triads and Hong Kong’s underworld. The things told and stories heard gave me an impressionable idea of a fictional story of what is, “The Water Trade,” by real themes into a fictional world.

How does it feel to be published with ‘Not So Noble Books’? I bet it feels amazing!
Firstly, the thought of ever being published is every writers dream! I had been contemplating on writing ‘The Water Trade,’ for many years, having been made redundant; it gave me the opportunity to put pen to paper. Having written a half the book, I sent the first three chapters to Not So Noble Books, not thinking to much of it, I continued to write through the day, when to my surprise I received an almost immediate email asking to read more chapters… I was ecstatic, leaping up and down like child at a fair ground. I quickly composed myself and immediately sat back down in front of my computer and forwarded the remaining chapters of my book. Within a matter of days, I received an email saying they wanted to publish my book. I was dumbfounded. I couldn’t believe my luck. I could hardly believe that Not So Noble Books wanted my book that I read the email twice then got my son to read it. I was over the moon, and even more elated that I had achieved my goal of becoming an author…

Do you have any upcoming projects you can tell us about?
I have something in the works, which is based on the binds of love which is a million miles away from the sex trade.

Other than writing what do you do in your spare time?
At the moment I’m putting all my spare time into marketing my current book, ‘The Water Trade.’ Aside from writing, I’m also concentrating on opening my own online business.

I know this is a repeated question on my blog, but how do you take your tea? (if you haven’t guessed, I love drinking Tea).
I take my tea black with no sugar. (at least ten cups a day).

About the Author
Charlie Deer writes thriller-fiction. Born and raised in North London, and after many years of living in Hong Kong, she now lives in South West London with her family and two Siamese cats. Savouring Hong Kong’s great culture and its multi-layered cosmopolitan lifestyle; Charlie soon came to hear of rumors and stories relating to the seedy side of Hong Kong through her friends, her lasted book, ‘THE WATER TRADE,’ was created as a result of the stories told to her. A keen story teller, Charlie decided to write her own fictional story based upon real themes of Hong Kong’s triads. You can follow Author Charlie Deer on Twitter @charlie_deer or on Facebook.

About The Water Trade

When two girls working in the London sex club scene get offered work in Hong Kong they think their dreams have come true. But what seems like a well-paid holiday soon turns into the trip of a nightmare. They have entered the water trade, will they get out alive?

You can purchase The Water Trade on Amazon UK and Amazon US.