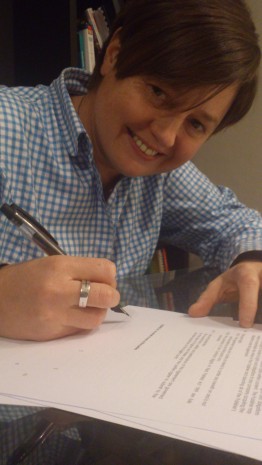 When I asked the land of Twitter and Facebook whether any authors would like to be involved in a Q and A, Ceri emailed me saying she’d love to. My first reaction to this was ‘YAYYY’ because it’s always nice to have an author you love want to be showcased on your blog and secondly because I had so many questions I wanted to ask about ‘Paradigm’. (I’d recently just finished reading.)

Ceri’s latest creation ‘Paradigm’ is a Dystopian masterpiece based in the future and deals with issues on how a selected number of people live within apocalyptic conditions. The Storms have destroyed modern day life as we know it and characters Alice and Carter try to cope with these changes.

If you haven’t already, you can read my review of ‘Paradigm’ here.

Now, let’s get onto the questions!

Welcome Ceri to ‘A Book and Tea’ how are you doing today?
I’m doing well – I’ve stockpiled enough dry goods to see me through any upcoming dystopian situation and the weather forecast isn’t too bad. So, all in all, well prepared and feeling fine.

Your latest novel ‘Paradigm’ is a dystopian masterpiece designed to make readers think about how they should look after the planet, would you say global warming and all the talk of ‘loving the earth’ gave you the idea to write Paradigm?
Not specifically global warming, more a lack of regard for our environment and humanity in general. Part of the idea came from looking around at how complex we’ve made the world – don’t get me wrong, I’m a huge fan of technology but some other things, especially in my field of work – financial markets, corporate sponsorship etc – have become so difficult to understand that the simple things in life get overlooked. I think when you strip all that away and look a the basics of what life is all about, it starts to become very interesting. And then it got me thinking – if we had to start over in an apocalyptic situation – what would we keep? And how far would human beings go to reinvent a different kind of society.

Paradigm is the first in the trilogy, can we expect a lot more suffering, heartache and excitement from the next two?
In a word, yes! The second book in the series is pretty well developed in terms of the thinking – I have all the chapters sketched out and the first section of the book competed. This is where we really get into the hearts of Alice and Carter – and find out exactly what is out there in the Deadlands. Book 1 was very much about exploring the ideas and getting to the root of what happens when the Storm devastation hits. There’s certainly some excitement, a little heartache and some really tough decisions to be made. There’s also a twist very early on that sets the pace. Book 2 is where the action really takes off!

Other than the Paradigm trilogy, do you have any other projects you can tell us about?
I’ve written quite a few short stories and had a number of them published in various competition anthologies and magazines. I’ve put together a collection and I’m hoping to get that out at some point this year – although finishing book 2 is definitely a priority. I’ve also got the start of a very different novel in the pipeline – it’s set in South London in the 1980s and is about what it feels like to be an outsider. That will have to wait too, though as my focus is getting to the end of the trilogy.

Your biography tells us that you love all things Spanish, where is your favourite place in Spain and do you enjoy lots and lots of Tapas? I love Barcelona and lots of Patatas Bravas.
I’ve driven from southern Spain right up to the north and I love Barcelona too – but my favourite place is Formentera, a tiny island off the coast of Ibiza. It’s tranquil and beautiful and I go there as often as possible to write and scuba dive. I’ve been going there for the last seventeen years – it’s so special to me, it’s got it’s own place in the acknowledgements of the book!

And finally, everyone that visits my blog gets asked this question, how do you take your tea?
Erm… I only drink coffee….strong with milk and no sugar. #awkward 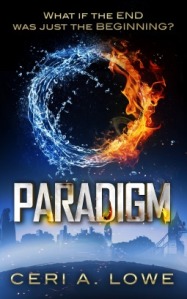 What if the end of the world was just the beginning?

Alice Davenport awakens from a fever to find her mother gone and the city she lives in ravaged by storms – with few survivors.

When Alice is finally rescued, she is taken to a huge underground bunker owned by the mysterious Paradigm Industries. As the storms worsen, the hatches close.

87 years later, amidst the ruins of London, the survivors of the Storms have reinvented society. The Model maintains a perfect balance – with inhabitants routinely frozen until they are needed by the Industry.

Fifteen-year-old Carter Warren knows his time has come. Awoken from the catacombs as a contender for the role of Controller General, it is his destiny to succeed – where his parents failed.

But Carter soon discovers that the world has changed, in ways that make him begin to question everything that he believes in. As Carter is forced to fight for those he loves and even for his life, it seems that the key to the future lies in the secrets of the past.

You can purchase ‘Paradigm’ on Amazon UK, Amazon US and Paperback.

About Ceri
When Ceri isn’t writing, she’s a self-employed project management consultant specialising in financial services. She lives in Bristol, England and has various obsessions including all things Spanish, travelling and, of course, writing.

She has just finished her novel PARADIGM, the first installment in the Paradigm Trilogy, a dystopian YA series set in a post apocalyptic world.

One thought on “Q + A with Ceri Lowe”