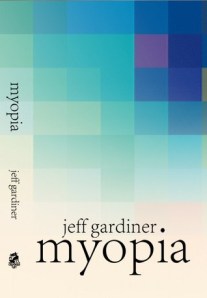 Jerry is bullied for wearing glasses. When he realises his short-sightedness is not a disability but a new way of perceiving and understanding the world around him, he begins to look at it from a new, unique perspective.

He even starts to believe he might have super-powers, but soon learns a great deal about himself and about the boy who is making his life such a misery.

Has Jerry discovered a new way of dealing with firmly held opinions?

Myopia is a novel about bullying, friendship and learning the hard way.

The Review
If you’re a glasses wearer then Myopia is definitely the book for you as you can relate 100% to how Jerry is feeling. You may not relate if you have great vision, but you’ll be able to read all about the things people with glasses have to do (eye tests, patches, etc). Just be glad you weren’t a child in the 80’s with NHS glasses, you’d be looking like Deidre Barlow. (Google her name and you’ll see what I mean).

Jerry Hough is a teenage boy who struggles with bullies. They seem to dislike the fact that he wears glasses and they try and make his schooldays a living hell. It’s difficult for any teenager going through school, what with puberty hitting everyone, but for Jerry it’s even worse.

I’ve worn glasses since I was 9 months old and all the things Jerry deals with I’ve experienced. When I was younger there were only two people in the entire school year who wore glasses and that was me and another boy. We both got bullied because we were “different”. The amount of times I’ve heard ‘speccy four-eyes’, ‘wow they’re ugly and massive’, and such like is endless, where as nowadays wearing glasses seems to be the ‘in’ thing. Your heart aches for Jerry because he is struggling with a lot of things, but one thing I loved was how Jerry’s parents and friends were a great support network and he even helped others deal with bullies, too.

Myopia was only 188 pages, but do you know what? They were a great 188. It was a perfect YA novel inspired to let other teens, or anyone else for that matter, know that it doesn’t matter if you look different, have an accent or have other hobbies, as long as you’re happy who cares what other people think? I always say if we were all the same the world would be a very boring place to be! Be different and embrace it 🙂

You can purchase ‘Myopia’ at Amazon UK, Amazon US and Paperback.