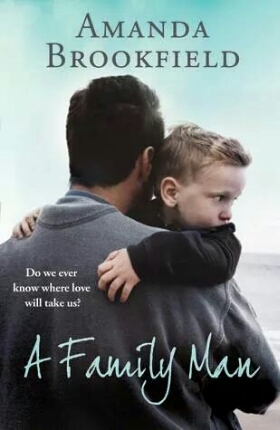 The Blurb
A FAMILY MAN tells the story of thirty one year old Matt Webster, who arrives home from work one day to find that his wife, Kath, has walked out, leaving him to care for their four year old son. Shock and hurt are compounded by the challenge of suddenly having to juggle work with being a single parent. While the needs of his confused, unhappy little son come first, Matt embarks on the difficult quest to find out what could have driven his wife to abandon their child. It is only as the truth emerges that he learns the full heartbreak and joy of unconditional love.

The Review
Thank you to the author Amanda for sending me a copy of A Family Man to read and review.

It was really refreshing to read a novel where the main character wasn’t a woman scorned and that the focus of heartache was that of a male. Matt’s wife has left him and he’s made to look after their 4 year old son Joshua. At first Matt is petrified and he doesn’t have any idea what he’s going to do, but help from his Dad, the babysitter and unusual friends, he eventually copes.

As I said before it was really nice to see a change of direction for once – I am a little tired of the main character being a female with a life that is turned upside down because they’ve been ‘cheated’ on. Don’t get me wrong I know it happens and it’s never right regardless of gender, but most chick-lit novels focus around a female lead.

Matt’s the type of character that everyone will adore, he’s vulnerable and trying his best to make his son Joshua happy. It’s a wake up call for him and although, it’s little to late, he realizes that he probably should have made more effort in his failed relationship and I totally agree. Anyone that expects their partner to make all the effort is stupid in thinking it’s all a bed of roses. However, the way that his ex-wife Kath dealt with it probably wasn’t the best, I mean who would just write a note and leave?

It was nice to read the development of Matt’s own personal journey and to see that no matter what, Joshua was always with a smile on his face and enjoying life. For a child as young as four, I doubt it would be easy to see their Mum just disappear, more so with no real explanation or understanding.

You can purchase A Family Man on Amazon UK and Amazon US.