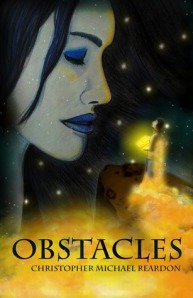 The Blurb
A child will die. You’re afraid to live. Would you go to all lengths to save him? Darkness knows no bounds, as Alcott, an African American doctor sees all too well. The man is petrified by death. His fragile existence rests at the mercy of the universe. This fact is far too much for him to handle. From unyielding nightmares to elevator terrors, he’s lost in paranoia.

Assigned to look after an ill child, Alcott’s horrors only heighten. Gari is a nine-year-old boy with a fatal disease. He will surely pass on within the year. Alcott bonds with him more and more each day. Part of him knows this grim fate just isn’t right.

Alcott befriends a hospital patient. This lunatic forces him to lug home an ancient text on bringing back the dead. Despite the man’s obvious dementia, Alcott attempts the scheme. Charging up a cliff, he recites the chant over ocean gusts.

A god woman glides in from the horizon. She instructs Alcott on the trials to save Gari’s life. These fearsome Obstacles require true strength. From battling sharks to wielding a flail, he must prove fortitude against genuine danger. Alcott decides his fate at this moment.

The Review
Thank you to Chris for sending me a copy to read and review.

Dr Alcott is looking after a sick boy Gari and unfortunately, the news of his illness being terminal sends him into despair. How can a boy so young have his life taken away so early? One random day Dr Alcott receives a book that transports him into another world where he’s forced to overcome Obstacles in exchange for his own life. This means dying Gari will survive.

The world Dr Alcott enters is full of magic and it’s ruled by a group of mythical beings. On the surface they appear like angels, but deep inside the are more like devils. Alcott tries in his might to succeed in completing the Obstacles as he wants the best for Gari.

Obstacles has a Hunger Games kind of vibe going on, which I shouldn’t openly compare it to, but it’s the feeling I was getting. The main difference is that they’re not competing with one another to survive, each have the own paths to follow.

I really felt for Dr Alcott because no way would I even think about wanting to die, but he literally stood up to it and got on with everything he had to do. You could tell that he wasn’t a selfish man and I thought that was very endearing. To be honest, all the characters involved stood up to the challenge and not once did they complain, now that’s full of guts.

Chris’s bio’ ends with ‘…fantasy books have always been an interest, because they challenge the mind and send you on an epic journey’ and I totally agree. With Obstacles you found yourself immersed in the mystical world and I know it’s make believe, but it felt real and it was written realistically and most of the time that’s hard to do.

As much as I loved Obstacles there was a slight drop in excitement during the middle of the challenges. I found that I was losing interest as it seemed to be the same thing over and over. However, that is my only criticism, I thoroughly enjoyed the rest.

You can purchase Obstacles on Amazon UK and Amazon US.