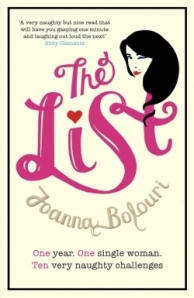 The Blurb
Phoebe Henderson may be single but she sure doesn’t feel fabulous. It’s been a year since she found her boyfriend Alex in bed with another woman, and multiple cases of wine and extensive relationship analysis with best friend Lucy have done nothing to help. Faced with a new year but no new love, Phoebe concocts a different kind of resolution.

The List: ten things she’s always wanted to do in bed but has never had the chance (or the courage!) to try. A bucket list for between the sheets. One year of pleasure, no strings attached. Simple, right?

Factor in meddlesome colleagues, friends with benefits, getting frisky al fresco and maybe, possibly, true love and Phoebe’s got her work cut out for her.

The Review
Thank you to Emma and Quercus for sending me a copy to read and review.

Phoebe makes a detailed sex list and decides she wants to try lots of new and exciting things. You follow her sexual quests and you’ll probably even learn things you never knew about.

Just give me a moment to have a cold shower because wow, I’m a little hot under the collar. I knew that The List had sexual content, but never did I think it would be to the degree it was. I think I even got a little red cheeked on a few occasions because well, who wouldn’t? I also had to try and explain the novel to my Mum, which was an adventure, I tell you. My Mum always seems to ask me about sexual things because she’s so innocent, but I love her.

It sounds weird when I say this, but although the subject matter contained lots of sex it didn’t come across crude or disgusting. I’ve read some Erotica novels before that have made me cringe because it felt a little creepy, but with The List it was done right. There were a selection of detailed sex acts that you probably wouldn’t even discuss with your friends or even partner, yet they didn’t make you feel uncomfortable.

I loved how Phoebe didn’t take herself too seriously and that she loved to have a good drink. She was genuine and down to earth and I really like that about her. Plus, she has so much confidence to do what she does, I couldn’t do the things she did and more so with complete strangers.

One thing I did find a little annoying was the relationship between Oliver and Phoebe. I mean, seriously? I obviously don’t want to give too much away, but one minute they were speaking and the next they weren’t. I don’t think characters should act like they were in the playground.

You can purchase The List on Amazon UK, Amazon US or in Paperback.