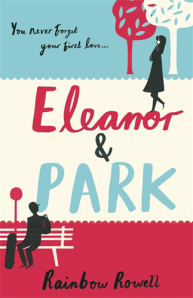 Eleanor… Red hair, wrong clothes. Standing behind him until he turns his head. Lying beside him until he wakes up. Making everyone else seem drabber and flatter and never good enough…Eleanor.

Park… He knows she’ll love a song before he plays it for her. He laughs at her jokes before she ever gets to the punch line. There’s a place on his chest, just below his throat, that makes her want to keep promises…Park.

Set over the course of one school year, this is the story of two star-crossed sixteen-year-olds—smart enough to know that first love almost never lasts, but brave and desperate enough to try.

The Review
I bought Eleanor and Park for two reasons, one because Fangirl was amazing and I fell in love immediately and two, meeting the author Rainbow Rowell and hearing her talk of the novel made we want to read it even more. She talked with so much passion and enthusiasm that I knew I had to give it a go.

Eleanor joins a new school and although hates it finds a friend in Park, a random guy she meets on the bus. They form an unexpected friendship through X-men comics and listening to cassette tapes and Park even tries some Taekwondo on one of his friends (probably not for the right reasons either).

What I loved most about Eleanor and Park was that it wasn’t overly romantic or cheesy because sometimes you get that from a Young Adult novel. Both characters were true to themselves and weren’t in your face with their friendship. From being a teenager I often went into things with rose-tinted glasses and Eleanor and Park took their time and were always a little cautious.

I know it sounds harsh, but Eleanor’s character made me smile because it was a realistic representation of many girls out there. She wasn’t described as ‘pretty’ or the ‘best looking in the school’ and she had her own little quirky traits; that’s why so many people loved her. She was true, honest and not ashamed of whom she was. It was just unfortunate to read that she had a horrible family or rather a horrible Step-Father. All she wanted in life was a loving family and although her Mum loved her deep down, it didn’t help. Personally, I think she may have spent a lot of time with Park because it was always at his home and his family were ‘normal’ and that’s what she craved.

Although I preferred Eleanor’s character to Park, he did have his own quirky traits and his character was developed really well. He too wasn’t afraid of whom he was and even wore eyeliner when people thought he looked a little bit silly. As a teenager you do experiment and try new things and it was good to see that Park did what we all have or could do. I don’t know why, but I absolutely loved Park’s Mum. She was a frequent character in the novel and it was nice to read about her.

You can purchase Eleanor and Park on Amazon UK, Amazon US and Paperback.