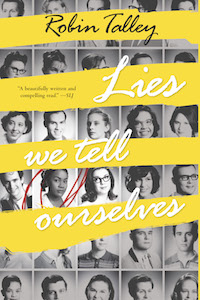 It’s 1959. The battle for civil rights is raging. And it’s Sarah’s first day of school as one of the first black students at previously all-white Jefferson High.

No one wants Sarah there. Not the Governor. Not the teachers. And certainly not the students – especially Linda, daughter of the town’s most ardent segregationist.
Sarah and Linda are supposed to despise each other. But the more time they spend together, the less their differences matter. And both girls start to feel something they’ve never felt before. Something they’re determined to ignore.

Because it’s one thing to stand up to an unjust world – but another to be terrified of what’s in your own heart.

The Review
Thank you to Cara from Harlequin Teen for sending me a copy to read and review.

Jefferson High School is one of the first schools to be involved with the integration program and a lot of people are unhappy with the idea. The black students are getting mixed with the white students to see how each can deal with the situation. Sarah, who is black, and Linda, who is white, are from two different worlds yet they both experience the same hatred in the 1950’s era. They try and deal with the violence, the name calling and just how dramatically their lives can change so quickly.

The story is told in five parts and each is a different character perspective – Sarah and Linda’s. I liked this element because it meant you could see how each race dealt with things and it wasn’t just one-sided. I think if you were told the story from one person you’d not have experienced the same emotion as you did with two.

One thing I thought was clever was that you wouldn’t have any idea that the author was white, as I can imagine it being quite difficult to write something that you’ve had no experience of. Robin did an amazing job at showing how people were treated, yet added a host of real emotions that would have come surfaced during the time.

All throughout the novel I just kept thinking that things like this did actually happen to the black community and I simply can’t comprehend how another human being could treat someone so horrid purely based on the colour of their skin. The colour of skin or even looks don’t define who a person is, it’s more the feelings inside. The sad thing is racism still happens today and it’s sick to think another human being could do this.

I wouldn’t even say that this book should be restricted to the YA genre because it didn’t have the typical YA elements. I think every age, gender and race should read this book and realise that no one should treat others disrespectfully just because they feel it’s ‘right’.

The only thing I’d want to change is the font in the image above. When a character hand wrote something the text appeared cursive and bold and I really struggled to read it.

You can purchase The Lies We Tell Ourselves on Amazon UK, Amazon US and Paperback.