Wow, doesn’t time fly when you’re having fun? It’s DECEMBER, which can only mean one thing, CHRISTMAS! I will admit now that I love Christmas and I will be festive for 30 odd days so please ignore me (don’t I am nice).

For the next few weeks (no time schedule) I will be posting a selection of Christmas reviews on the blog. You will also have a few non-Christmas related reviews too, I don’t want you all getting bored of the season!

So, what are you waiting for? Grab a Mince Pie and a glass of Mulled Wine and read my review of Snow Globe by Sheila Roberts below! 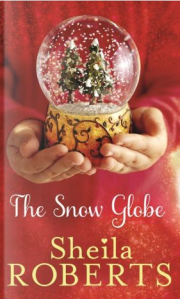 The Blurb
Discover an unforgettable holiday treasure in Sheila Roberts’ heartwarming tale of love and laughter, magic and miracles, friendship and coming home…

On a blustery afternoon, Kylie Gray wanders into an antique shop and buys an enchanting snow globe. “There’s a story behind that snow globe,” the antique dealer tells her. The original owner, he explains, was a German toymaker who lost his wife and son right before Christmas. When the grieving widower received the handcrafted snow globe as a Christmas gift, he saw the image of a beautiful woman beneath the glass—a woman who would come into his life, mend his broken heart and bring him back to the world of the living. For years, the snow globe has passed from generation to generation, somehow always landing in the hands of a person in special need of a Christmas miracle.

Kiley could use a miracle herself. This year, all she wants for Christmas is someone to love. A hopeful shake leads her on an adventure that makes a believer out of her. When Kylie shares the story of the snow globe with her best friends—two women with problems of their own—they don’t believe it. But they’re about to discover that at Christmastime, sometimes the impossible becomes possible and miracles really do come true.

The Review
Thank you to Clara from Little, Brown and Piatkus Books for sending me a copy to read and review.

Kylie finds an antique Snow Globe in a second hand store and treats herself to the little gem. What Kylie doesn’t realize is that this little globe turns people’s lives around and makes things better for each of them. Kylie is joined by her two friends Alison and Suzanne and they embark on new adventures.

This will be the first Christmas novel I have read in 2014 and I have to say I was very close to putting all my decorations up in the month of November. Shelia did an amazing job at describing the Christmas festivities and just everything associated with the season. I love Christmas with a passion so to read something that makes me all happy and festive is great (Mince Pie, anyone?). Not that you should judge a book by its cover, but the cover is beautiful – that helped me feel all festive, too.

Snow Globe flips between each of the three women’s lives, but you learn more about Kylie than you do of the other two. Personally, I’d have liked to have a bit more depth from Alison and Suzanne’s stories because they could have been developed so much more. This also led me to disliking Kylie a little bit. I know she was suffering with unemployment and being dumped, but I just don’t get why characters think they’re lives are so rubbish when they don’t have a partner. Surely you should live your life for yourself? ANYWAY…

All in all, this was a really festive and sweet novel and it got me into the spirit of Christmas.

You can purchase Snow Globe on Amazon UK and Amazon US. The Paperback I received is not released until tomorrow, but the Kindle edition is available right now.