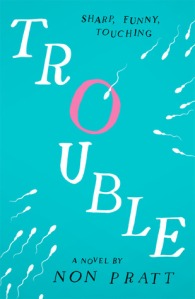 The Blurb
In this dazzling debut novel, a pregnant teen learns the meaning of friendship—from the boy who pretends to be her baby’s father.

When the entire high school finds out that Hannah Shepard is pregnant via her ex-best friend, she has a full-on meltdown in her backyard. The one witness (besides the rest of the world): Aaron Tyler, a transfer student and the only boy who doesn’t seem to want to get into Hannah’s pants. Confused and scared, Hannah needs someone to be on her side. Wishing to make up for his own past mistakes, Aaron does the unthinkable and offers to pretend to be the father of Hannah’s unborn baby. Even more unbelievable, Hannah hears herself saying “yes.”

Told in alternating perspectives between Hannah and Aaron, Trouble is the story of two teenagers helping each other to move forward in the wake of tragedy and devastating choices. As you read about their year of loss, regret, and hope, you’ll remember your first, real best friend—and how they were like a first love.

The Review
Let me just take a moment to breathe because I’m all excited after reading Trouble – it was amazing. I’ve heard many bloggers praise the novel and from the recommendation from Lisa I just knew I needed to read it.

Hannah is 15 and pregnant – not the best combination – but she steps up to the plate and deals with the consequences. No one in her school is surprised because Hannah’s a slut and up until the news of her pregnancy she would probably agree. There’s one major issue that she is scared of dealing with and that’s telling the Father. Even with her reputation she does know who the father is, but she doesn’t want anyone to know. In steps – her new best friend – Aaron who takes it upon himself to pretend to be the baby’s father.

Non Pratt does a great job at addressing a very important issue – teenage pregnancy – and she doesn’t hold back. A lot of authors, programmes and the such like tend to either push the issue under the rug or tone the issue down, Non doesn’t. There’s no point in sugar coating an issue that affects a lot of young woman and nowadays it isn’t classed as such a strange thing anymore.

You’ve got to read Trouble with a very open mind as it’s the insight into a group of teenagers and their lives. There’s lots of talk of sex and drinking which is described in all its glory. Personally I don’t think the novel would have worked as well if it was conservative.

You can purchase Trouble on Amazon UK, Amazon US and Paperback.

Find out more about Non at her Twitter at @NonPratt.