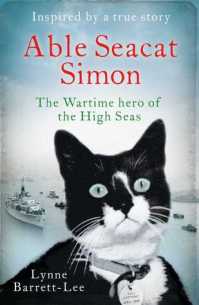 The Blurb
Inspired by a true story, this is the fictional reimagining of ‘Able Seacat’ Simon’s adventures and heroics in dangerous wartime seas.

Simon is discovered in the Hong Kong docks in 1948 and smuggled on board the H.M.S Amethyst by a British sailor who takes pity on the malnourished kitten. The young cat quickly acclimates to his new water-borne home, establishing himself as the chief rat-catcher in residence while also winning the hearts of the entire crew.

Then the Amethyst is ordered to sail up the Yangtze to take over the guarding of the British Embassy, and tragedy strikes as the ship comes under fire from Communist guns. Many of the crew are killed and Simon is among those who are seriously wounded. Luckily, with the help of the ship’s doctor, the brave cat makes a full recovery and is soon spending time with the injured men in the sick bay, purring and keeping their spirits up. News of Simon’s heroism spreads and he becomes famous world-wide – but it is still a long journey back to England for both the crew and the plucky little cat known as ‘Able Seacat Simon’.

I purchased Able Seacat Simon based on cover alone – a very bad mantra to follow, but I am a big fan of cats and thought ‘a story about a cat at sea can’t be bad’ and it wasn’t!

Simon is an orphaned cat from Hong Kong that finds himself on the Amethyst ship, he’s taken on board by a human, a species that Simon is very cautious about.

The story is told entirely through the words of Simon, which I absolutely loved. It’s very rare to read something that is told from the mind of an animal. They can’t communicate by words with humans, but I’m definitely sure they have think the same as we do, or just a  little bit different.

There are two main learnings that I took out of the novel:

It is evident that Simon loved his Mother and missed her greatly. You are given snippets of her mantra and sayings ‘The time when the humans are all going to sleep. The time when the moon is our friend’. I sometimes forgot that Simon was in fact a cat and just took it that he was a human, but with differences compared to the other sailors. The Ancient Egyptians don’t believe cats are intelligent for nothing!

Essentially, Able Seacat Simon was all about one cats journey of self discovery and rehabilitation after being injured. I fear my review may bring out the madness in me, but honestly, hearing about Simon and his adventures as a cat was brilliant!