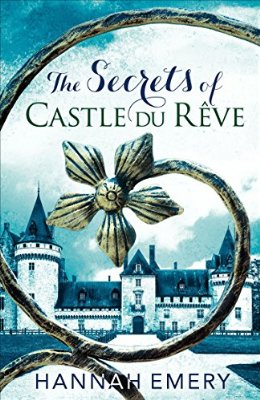 The Blurb
In the quaint, seaside town of Silenshore a legacy of secrets is about to be revealed…

Growing up in the imposing Castle du Rêve during 1940s wartime, young Evelyn longs for a life outside the castle walls. She dreams of attending glamorous parties, gracing the silver screen and being swept off her feet by a dashing, debonair beau. But innocent Evelyn is unaware that her bid for freedom from the oppressive castle will change the course of more than just her life…

In the early Sixties, sweet, intelligent Victoria meets the man of her dreams! Yet the expression of their love comes with consequences. In the shadow of the mysterious castle, is their relationship doomed from the start?

In the present day, Isobel has just learned she’s pregnant. An unexpected challenge she can only hope she’s up to. Except living in the father of her child’s family home, beneath the eyes of the castle, all is not as it seems… Soon secrets that have been hidden for decades threaten to change the lives of Isobel’s new family irrevocably.

Three women’s lives tangled together in a web of secrets, scandal and deceit, as the legacy of Castle du Rêve is finally discovered…

The Review
Thank you to author Hannah for sending me a copy to read and review.

Having read Hannah’s first novel Secret in the Shadows, I definitely knew I wanted to read The Secrets of Castle du Rêve!

The novel focuses on three women, Evelyn, Victoria and Isobel, each of which belong to different time periods. They all have one thing in common, the Castle du Rêve.

Evelyn experiences the disruption of World War 2 and during this time lives in the Castle du Rêve, owned by her family, and spends time with the evacuees who have been sent to the castle for safety. Her story develops where she falls in love with Jack, but he turns nasty when Evelyn’s family secret is revealed.

Victoria falls in love with lecturer Henry after he unexpectedly visits her father’s antique shop that she works at. One thing I did find it a little uncomfortable was that Victoria was only 16 and Henry in his late twenties – age is defintiely just a number, but it felt a bit wrong. Victoria too has a secret that she cannot tell a soul and lands a bed at an unhomely boarding.

Isobel becomes pregnant with her new boyfriend Tom, but it’s Tom’s Mum Daphne that hides all the secrets. Isobel suffers with post natal depression, and struggles to deal with Tom’s past.

Out of all three ladies, my favourite had to be Evelyn. I loved hearing about her time at the castle and the fun she experienced with her new friends. If Evelyn wasn’t part of the story, Victoria and Isobel wouldn’t exist (a little sneak peek for you there!).

The name of the novel delivers exactly what it says on the tin, it’s full of secrets! Each time you read, you find yourself wanting more and more!