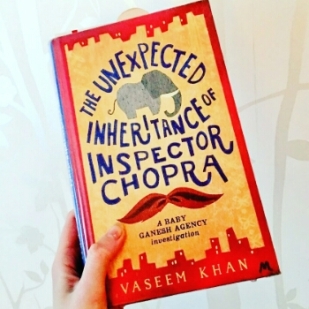 The first is the case of a drowned boy, whose suspicious death no one seems to want solved. And the second is a baby elephant.

As his search for clues takes him across the teeming city of Mumbai, from its grand high rises to its sprawling slums and deep into its murky underworld, Chopra begins to suspect that there may be a great deal more to both his last case and his new ward than he thought.

And he soon learns that when the going gets tough, a determined elephant may be exactly what an honest man needs…

My friend Jade and I read this novel as part of a read-a-long, so below you will find reviews from both of us – enjoy!

My Review
The Unexpected Inheritance of Inspector Chopra is a modern take on a traditional India. A story that awakens your senses with the delights of the Indian culture.

Following Inspector Chopra’s recent retirement, he embarks on a new chapter of his life. Not content with being a civilian, he takes it upon himself to find out why a poor man was murdered and tries to convince the police force as to why the case should be investigated.

He too receives a baby elephant called Ganesh from his Uncle. Why such a present has landed on Chopra’s doorstep, he’ll never know! Both his investigation and the baby elephant don’t really appear together and are often separate inclusions. Baby Ganesh sadly doesn’t make that much of an appearance, which was a little disappointing. I expected to see the elephant as Chopra’s trusty sidekick, but he was more of a passing blur.

Chopra was a passionate man and was determined to bring justice to the murdered boy. Although he had retired, he seems to do more work  now than he ever did when part of the  police force. I liked his passion and often found myself feeling love towards him – in a non creepy way! He didn’t discriminate based on wealth and wanted to bring justice for the family of the boy. He also really loved his wife Poppy and would do anything for her. Granted, he didn’t spend as much as time as he should (now retired) but you never once thought that Poppy didn’t mean anything to him.

I’ve never been to India, so reading about the culture and Vaseem’s description really made me feel like I was there.  As I said at the beginning of my review, it awakens your senses and transports you to Mumbai. It’s definitely a location on my ‘to visit list’, so fingers crossed I will see what’s to offer.

Jade’s Review
I may end up paraphrasing Clare here but ‘The unexpected Inheritance of Inspector Chopra’ is essentially about a forcibly (due to health reasons) retired Police inspector who has a murder case fall on his desk on his last day on the force as well as a baby elephant delivered to his home courtesy of his uncle (I never figured out whether his uncle was alive or not when he left the elephant to him). Without spoiling the story too much, thus ensues the ups and downs of Chopra trying to figure out the details of what is seemingly a covered up murder as a regular Indian citizen whilst trying to avoid being found out by his wife (who would be horrified by him putting himself in stressful/dangerous situations when he’s meant to be retired) and the police force (who would have him arrested for sticking his nose where it no longer belongs).

Supposedly the baby elephant, Ganesh, is his partner in crime, at least this is suggested on the back of the book but Ganesh features very little and I forgot he even existed for a large part of the book. Occasionally he helps Chopra but in some parts it just feels like the elephant is getting in the way of Chopra’s investigations, being an understandably inconvenient companion in public spaces. I was hoping for Ganesh to have a fully formed personality but beyond little tit bits he’s just an elephant. As it’s the first in a series it is possible that Ganesh will feature more in future books but I’m not sure how helpful (or easy for an author to feature) an elephant can be to a crime investigation. Overall it’s an easy read, a simple crime story with an elephant thrown in to make it a bit different. I’d recommend it to friends as a beach read but not to rush out and buy it.

One thought on “Book Review: The Unexpected Inheritance of Inspector Chopra by Vaseem Khan”