About The House of Silk 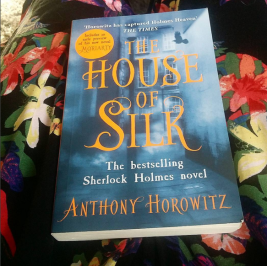 It is November 1890 and London is gripped by a merciless winter. Sherlock Holmes and Dr Watson are enjoying tea by the fire when an agitated gentleman arrives unannounced at 221b Baker Street. He begs Holmes for help, telling the unnerving story of a scar-faced man with piercing eyes who has stalked him in recent weeks.

Intrigued, Holmes and Watson find themselves swiftly drawn into a series of puzzling and sinister events, stretching from the gas-lit streets of London to the teeming criminal underworld of Boston and the mysterious ‘House of Silk’ .

In a tale told by Sherlock Holmes’s sidekick, Dr Watson, The House of Silk is a detailed account of the investigation of a mysterious scar-faced man hiding in the shadows. Imagine your favourite crime drama, but housed in the late 1800’s in London, and you’ll be close to what the book is about.

I will admit I originally bought Moriarty to read and realized that it was second in the series, so had to purchase a copy of The House of Silk. I may have been able to read Moriarty as a stand-alone, but you can never have too much Sherlock Holmes in your life, can you? (The answer is no!)

It’s no secret that I am a big Victorian history fan, especially when it’s Sherlock Holmes and his adventures. Horowitz adds a modern twist to the well-known and lovable Holmes, which I quite liked. Having never read anything by Arthur Conan Doyle before (I know!) I couldn’t necessarily compare the two writings, but from a host of Doyle fans suggesting that the workings are just as good as each other, I knew I was expecting great things from this book.

The House of Silk, and its meaning, remains a mystery until quite near the end, which from my point of view, encouraged my mind to piece together the duo’s findings and to condense the crimes committed and the culprits. You really needed to stay on the ball because things happened left, right and centre, which meant you were never bored. Although you certainly needed to keep up, it wasn’t taxing; it was fun!

As mentioned, I’m a Victorian era fan, so my mind often jumped into imagination  land and dreamed of being in London with the horse and carriages, lamp lights and cobbled streets. Granted I couldn’t be a poor Victorian, but even so! Anthony’s descriptive nature definitely took you back and helped you be a part of the story – like a fly on the wall.

2 thoughts on “#bookreview: The House of Silk by Anthony Horowitz”