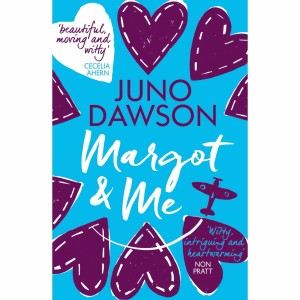 The Blurb
Sometimes love has to cross all kinds of barriers…

Fliss is on the way to visit her grandmother in Wales – the grandmother who she doesn’t get on with – with her mother who is recuperating from chemotherapy. But her mum is getting better, that’s the main thing, so Fliss can concentrate on being grouchy and not looking forward to meeting her grandmother Margot, who is so cold and always so unforgiving of Fliss’s every mistake…But when the six months is up, Fliss consoles herself, she and her mum will go back to London and back to Real Life!

In the meantime Fliss needs to get used to her new school, not upset the scary girls, and just keep her head down (whilst still making sure that everybody knows she is from London, of course). Then Fliss discovers a diary at the back of her bookcase. It is from the 1940s and is set in World War II, and, Fliss realises, is actually Margot’s diary from when she was a young woman during the Blitz. Intrigued, Fliss begins to read. There she discovers a whole new side to Margot, a wartime romance and also Margot’s deepest, most buried secret. And it is then that Fliss discovers something terrible in her own life that she is going to have to come to terms with…

So, it all begins with Fliss and her Mum moving into her Grandma’s farm, due to her Mum’s illness – the big C. Fliss being the strong independent woman that she is doesn’t really like the idea, especially when she’s leaving her life behind in the big smoke! Fliss loves fashion, so the thought of farm life repulses her. Plus, Margot is stone-faced and boring – why can’t they just stay in London? They’ve been fine before Margot stepped in!

You’d be wrong in thinking that Fliss is a spoilt teenager and always after her own way, she’s actually a vulnerable teenager struggling with the fact that her Mum has Cancer. She’s putting on a brave face and uses her outlandish fashion sense and mannerisms to compensate.

During a quick look around the farm, Fliss finds an old diary written by Margot which sees her moving to a Welsh farm during the Blitz. The diary full of tales of the War changes Fliss’s opinion of her Grandma and she actually sees some similarities between the two of them. Perhaps Margot is frosty and stone-faced because things happened to her that drained her life of love and happiness – living during the War can’t be easy.

While the majority of the story focuses around Margot’s diary, you still see Fliss learn from her own actions and develop into a beautiful young girl. Moving to the small Welsh town means that she has no friends, has to go to a new school and learn to live in a place that closes it’s doors around 6pm, don’t expensive the London Night Life around there! She forms new friendships and (sadly) new enemies, but they make her stronger. There’s perhaps a crush on a teacher that pops up too!

Margot and Me is a book that should be read by the older generation, as well as the Young Adult audience that it’s intended for. It’ll open the eyes of those thinking teenagers are superficial and moody and make the younger audience realise that the older generation have experienced situations just like themselves and that they were young once!