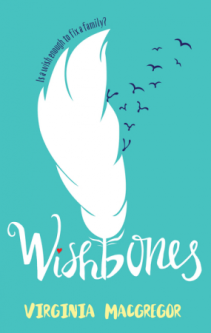 When Feather comes home on New Year’s Eve to find her mother – one of Britain’s most obese women- in a diabetic coma, she realises something has to be done to save her mum’s life. But when her Mum refuses to co-operate Feather realises that the problem run deeper than just her mum’s unhealthy appetite.

Over time, Feather’s mission to help her Mum becomes an investigation. With the help of friends old and new, and the hindrance of runaway pet goat Houdini, Feather’s starting to uncover when her mum’s life began to spiral out of control and why. But can Feather fix it in time for her mum to watch her swim to victory? And can she save her family for good?

A unique and heartbreaking tale of teenager, Feather, and her mother’s struggle with obesity.

Wishbones is a story told through the eyes of Feather, a girl that has a lot of responsibility on her young shoulders. She’s having to support her mother in her battles with obesity. It’s no secret that her mother is morbidly obese, but people seem to know the reasoning behind her comfort eating – why won’t anyone tell Feather?

Her main goal is to get her mother healthy again, but how can someone be helped if they won’t help themselves? Feather doesn’t overpower or demand actions, she merely supports her mother in anyway she can – bringing a slimming group to her house and cooking her healthier meals; she even tries to rebuild her parent’s marriage – her Dad is struggling too. However, her mother can’t comprehend the changes and gets frustrated with Feather, when all Feather wants to do is help.

I’ve never experienced the level of emotional strain that such an issue can have, so I can only feel for Feather and her determination. To Feather, her mother is her best friend and the only person she can rely on, so when she learns of secrets it’s only natural that she feels hurt. Not only that, but she gets frustrated because she can’t understand why. Surely it’s easy to just stop your unhealthy habits? She’s also scared that her mother is going to die, a feeling you don’t want any child to experience.

Not only was Feather dealing with her family life, she too had emotional troubles of her own. Every teenager has experienced their first love and then equally the heartache of it ending (not all, but most!), which Feather saw coming from new guy, Clay. When he joined the small village, her heart fluttered, but his inner secrets caused their relationship to not develop. Clay had his own struggles with food, which I thought was a great thing to highlight, as eating habits and body image doesn’t restrict themselves to gender – it affects us all.

I’m not going to lie, Wishbones is emotional – particularly the feeling of sadness – but three are elements of companionship and love. The inclusion of characters Jake (her best friend, Mrs Zas and Rev Cootes aids to Feather’s support network and help her in times of solace.