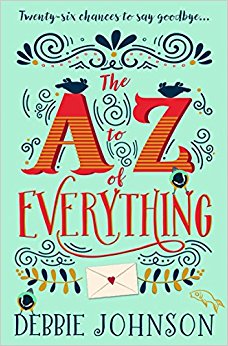 The Blurb
P is for Paris where it all began. J is for Jealousy where it all came undone. But the most important letter is F. F is for Forgiveness, the hardest of all.

Sisters Poppy and Rose used to be as close as two sisters could be, but it’s been over a decade since they last spoke. Until they both receive a call that tells them their mother has gone – without ever having the chance to see her daughters reunited.

Andrea, though, wasn’t the kind of woman to let a little thing like death stand in the way of her plans. Knowing her daughters better than they know themselves, she has left behind one very special last gift – the A-Z of Everything.

What a beautifully written story about the loss of a Mother and the re-building of a family saddened by loss.

With all Debbie Johnson novels, you know that you’re sat upon this emotional rollercaster that often leaves you feeling happy, sad, joyous and warmed and The A to Z of Everything is no different. It made me laugh, cry and smile – three things that make for happy reading.

Sisters Poppy and Rose are reunited (maybe the wrong word) by the death of their mother, who leaves them an A to Z quest to being them back together.

Told in the present and past by Poppy and Rose, you read their POVs with insights into their current lives (following the A to Z trail set by their mother), as well as, the past, before their falling out saw them no longer talking to one another. 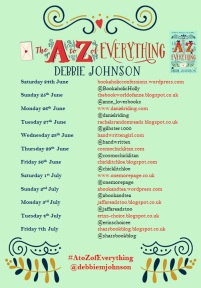 It’s no secret that they are the polar opposites – Rose deems herself as the less glamorous out of the two, a divorcee with a teenage son and a “boring” life. Poppy is a successful power-hungry woman who prides herself on her “perfect” lifestyle and appearance.

I wish Rose stopped comparing herself to Poppy all the time especially because she didn’t need to. She had achieved a lot in her lifetime and her son was a credit to her. Yes, Poppy had the money, but that’s not everything and I imagined Poppy thought the same.

The thing I loved the most was hearing about all their memories, and the good times they spent together. Plus, learning about Andrea’s lifestyle as an actress.

Win a copy of the book!

Want your very own copy of the #AtoZofEverything to hold in your hands?

2 thoughts on “#bookreview: The A-Z of Everything by Debbie Johnson + GIVEAWAY!”