So, I’m back with another #bookreview about cute little puppies and pugs. Join Percy and Hugo on their happy (and sad) adventure.

You may have noticed that it’s been awhile since I’ve posted. Well, let’s just say I’ve had trouble with my eyes and they’ve been all crusty and disgusting! I’m still not 100% better. However, I can sit at my laptop and write, so that’s one positive, right?

I’d also like to let everyone know that I’m participating in NaNoWriMo, are you? Let me know in the comments below! Anyway, onto the review: 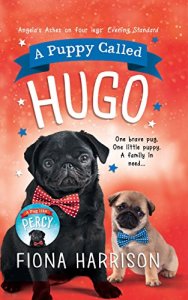 The Blurb
Following hot on the paws from the bestselling A Pug Like Percy, the nation’s favourite pug is back! And this time, Percy has puppies…
Percy the pug has found a loving home with Gail, Simon and their daughter Jenny. But now it’s time for Percy’s new puppies to fly the dog bed, and become a companion to someone in need – which turns out to be closer to home than the family first think…

On a visit to Gail’s parents, Percy begins to suspect that all is not well with Eric, Gail’s father. And when he suffers a nasty fall and is diagnosed with Alzheimer’s, Percy knows just who to send to the rescue – adorable pup Hugo.

Can Hugo help Eric through the tough times, and grow into the kind of Pug to make Percy proud?

Percy and his four-legged friends are back for the next instalment into their fluffy lives.

Here’s the backstory: Percy is a cute little pug left abandoned at a Dog’s Shelter by his previous owner. In steps Gail, a caring individual that falls for Percy straight away. In a previous instalment, A Pug Like Percy, tells us all about Percy and Gail’s relationship and their bond. However, A Puppy called Hugo is a story about Percy’s new puppy son, Hugo.

The story is narrated by Percy the dog. I will admit that you often found yourself thinking Percy is a human, until he barks or chases after a ball. It’s a refreshing change from the norm, which I believe is a good thing in a saturated market.

Hugo is a cheeky little chap and often causes problems for his parents – they are getting frustrated. However, they love him dearly. Everyone is more concerned about Gail’s family as they’re having to cope with Alzheimer’s Disease. I can’t imagine what it’s like to care for someone you love and they don’t remember who you are. Also, the person suffering, oh, it’s just heartbreaking. Sometimes it’s the little things that help, and Percy and Hugo aid the diagnosis and provide some much-needed care and affection for the family.