The Blurb
A young British couple are driving through France on holiday when they stop for gas. He runs in to pay, she stays in the car. When he returns her car door has been left open, but she’s not inside. No one ever sees her again.

Ten years later he’s engaged to be married; he’s happy, and his past is only a tiny part his life now. Until he comes home from work and finds his new wife-to-be is sitting on their sofa. She’s turning something over in her fingers, holding it up to the light. Something that would have no worth to anyone else, something only he and she would know about because his wife is the sister of his missing first love.

As more and more questions are raised, their marriage becomes strained. Has his first love somehow come back to him after all this time? Or is the person who took her playing games with his mind?

Bring Me Back will be the third book that I have read by BA Paris and as always, I was not disappointed. However, it was probably my least favourite of her novels. Paris’s other books include The Breakdown and Behind Closed Doors – all with a thriller/crime feel.

Told in three parts, Bring Me Back is the story of Layla and her disappearance. Finn, her (ex?) boyfriend, is the narrator whereby he talks you through his own ramblings, as well as his relationship with Layla’s sister Ellen (oh er). I’ll have to admit that I felt a little awkward knowing that Finn was planning to marry Layla’s sister Ellen, regardless of how long Layla had been missing for (12 years!). Part of me hopes that he was doing it because he actually did love Ellen, rather than to be with her because she reminded him of Layla.

You also get to read the narrative of an unknown character that is playing with Finn’s head. Is it Layla? his friend Harry, or someone else? The ending will reveal all.

A clever story of mind games, sleep deprivation and what, when, how, why’s? – you may also experience a lack of sleep too because you just have to find out if Layala is back! However, let’s be honest here and say that (to me) it wasn’t as action-packed as I thought it was going to be. I’d say it was more of a calculated and well-thought-out story that left you feeling content with reading for a few hours.

Other book reviews commented on how obvious the ending was – totally don’t understand that. They must be great detectives because I had NO idea that was going to be the outcome. Yes, I did try and think about who took Layla because she wouldn’t have just left on her own accord – that’s not a spoiler! However, I never imagined the ending to be how it was. 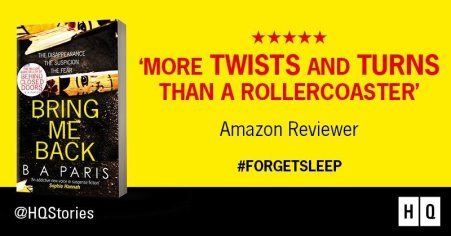 2 thoughts on “#bookreview: Bring Me Back by @BAParisAuthor”